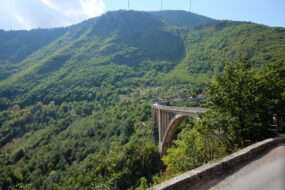 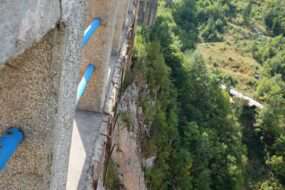 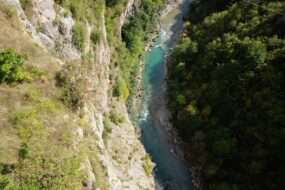 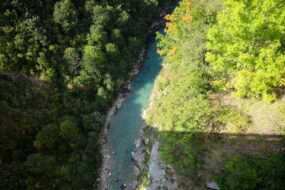 Djurdjević’s bridge (Đurđević’s bridge) runs over the canyon of the river Tara, it is located in the northeast of Montenegro. It is an arched reinforced concrete bridge of unique construction. The bridge is made up of five arches that open 170 m above the river level, the length of the bridge is 370 m.

The bridge was built in the period 1937-1940 and in its time was one of the most advanced bridges in Europe, at the same time it was the first in terms of size, it was a  the largest reinforced concrete bridgein Europe.

In 1942, not long after the completion of the entire bridge, it was occupied by Italian fascists and Chetniks. Yugoslav partisans, in an attempt to slow down the advance of the opponents, destroyed one of its arches. The bridge was repaired and reopened in 1946 and is still an important technical monument in the country.

Djurdjevic bridge is part of the important communication between Belgrade and Podgorica.

Where to find Djurdjević Bridge