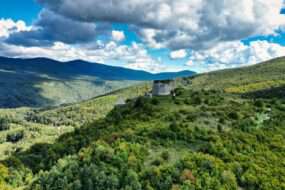 Ostrovica Castle was built around the 15th century on the foundations of older buildings from the Roman period, located in the Croatian parish of Lapac and was owned by princes Kurjaković (later Karlović) from Krbav. At the end of 1523, the fortress was occupied by the Ottomans until 1878. Under the rule of the Turks, the fortifications were expanded and strengthened, and the castle was used to house the military garrison. The castle was greatly expanded by the Ottomans at the beginning of the 17th century. It acquired today’s dimensions at the beginning of the 18th century.

Where to find Stari Grad Ostrovica