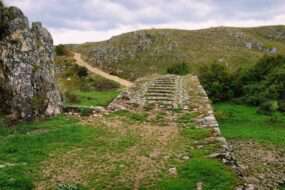 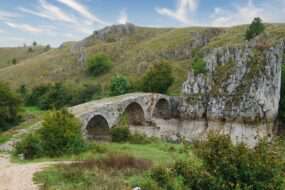 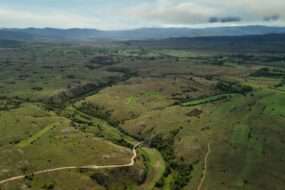 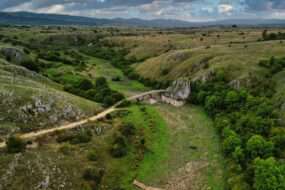 In Bosnia and Herzegovina you will find many interesting and little known monuments. One of them is Ovčiji Brod, a bridge from the same period as the Old Bridge in Mostar.

The bridge in the village of Bratač near Nevesinje connecting the banks of the river Zalomka was called by the locals Ovčija Brod (Sheep’s Boat). There is no exact information about its construction, but it is believed that it was built by the Ottomans probably in the 16th century. According to historians, it is probable that the bridge stood here during the Roman Empire, because the Roman road leads directly to the bridge. There is also a legend that it was built together with the mosque in Odžak by the widow of Bej Ljubović.

In the riverbed under the bridge, a plaque with an inscription in Arabic was found. The board was halved and the inscription was unclear due to the long exposure of water. However, in cooperation with experts from the BiH National Museum, two words were read, Hajrat and Mahmud. Hajrat means an act that someone does to gain rewards. The name Mahmud most likely refers to Sultan Mahmud, who ruled from 1730 to 1754 and a bridge was built in his honor. This plaque is still the only evidence that could determine the year of construction of the bridge.

The sheepdog is completely built of stone and still withstands the ravages of time, even though it is already in a technically worse condition. The bridge has three semicircular openings, the first of which is slightly smaller along the left bank, with a span of seven meters, while the middle and right are the same, nine meters wide. The pillars between the holes are 2.4 meters wide. Its total length is 29 meters, width 4 meters and reaches a height of 24 meters.

Where to find Ovčiji Brod